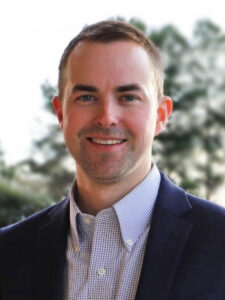 Steven was born and raised in West Texas where he spent much of his time volunteering in the ‘Special Needs’ community. Upon graduating High School, Steven moved to Tyler, Texas to attend the University of Texas at Tyler. He graduated in 2008 with a Bachelor’s degree in Psychology and went on to earn his Master’s degree in 2012 in Public Administration. In 2008, he began his career managing Intermediate Care Facilities for persons with Intellectual Disabilities.

Steven joined the BVT team in 2012 and has served in various roles/responsibilities since that time, including Associate Development Director, Day Habilitation Director, and most recently as the Executive Director. In his spare time, Steven enjoys playing tennis, playing the guitar, and jumping on the trampoline with his two kids. He and his wife, Haley, attend South Spring Baptist Church in Tyler where he serves as a deacon. He is honored to be able to lead BVT and, along with others, provide the best possible atmosphere to each resident who calls it “home.”

There are no upcoming events at this time.